Procession in memory of those killed by cannabis marched in Minsk

On 2 November in Minsk around 25 people joined the “Cannabis Dziady” procession. Dziady is an ancient Slavic feast commemorating the dead ancestors. Protesters held empty photo frames with black ribbons and layed a funeral wreath to those killed by cannabis at the United Nations Square in the capital of Belarus. 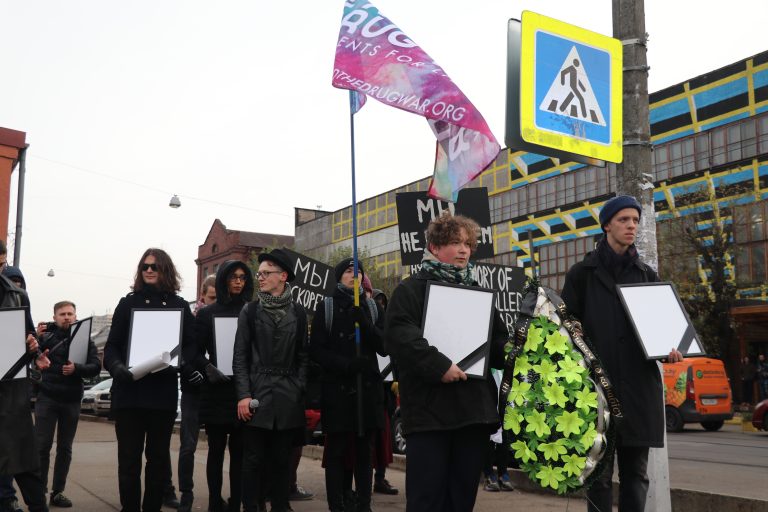 The procession was organised by Legalize Belarus movement together with a group of young parliamentary candidates promoting youth agenda. Although elections in Belarus are not recognised by OSCE and other international organisations since 1994, many doors for public communication are opened for civic society organisations during the period of election campaigning.

“We do not campaign for ourselves as we know elections are fake in Belarus. Instead, we use the opportunities the candidate status gives to interact with people and with the government”, — explained Ałana Hiebremaryjam who is running as a candidate of Belarusian Students’ Association.

Belarusian drug policy is known to be the harshest in Europe. Reportedly, thousands of young people are convicted of minor non-violent drug-related offences and held in hazardous labour colonies. Recently activists proposed a bill that would decriminalise possession of controlled substances for personal use.

“80% of Belarusian drug market is cannabis products. Our march is aimed at showing how absurd and ineffective Belarusian drug policy is. We demand that the parliament adopted the amendments we propose. Young people should stop going to prison just because they smoked weed”, — Stas Šašok from Legalize Belarus said.