Proposed legislation changes as for regulation of drugs in Belarus explained

In June 2019 the House of Representatives recognized excesses in the state drug policy. The lower limits of punishment for distribution of controlled substances have been reduced. However, the adopted amendments are clearly not enough to restore justice and implement a humane drug policy aimed at healthcare. 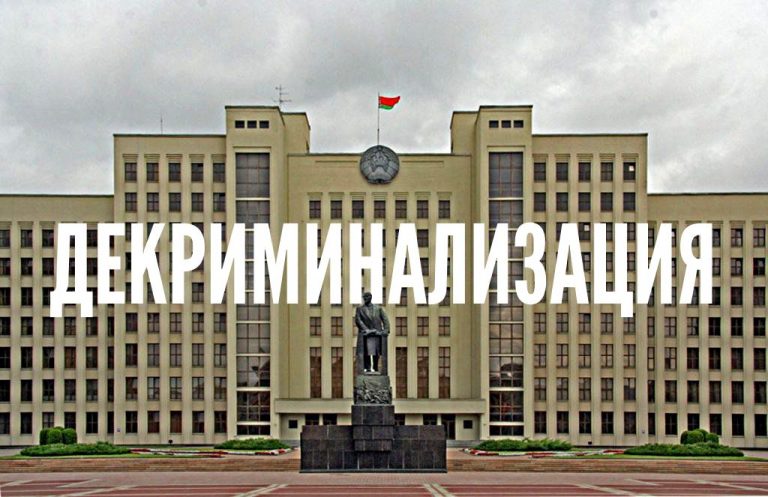 We call for a fair differentiation of criminal liability for drug-related offences. For example, there is only administrative liability in Russia for storing small amounts of controlled substances; it may occur in form of a fine or an arrest up to 15 days. Storing a tenth of a gram of hemp in Belarus means a criminal record for a person and at least six months of freedom restriction. The state is not able to detect real drug dealers and recoups on ordinary consumers.

Our bill introduces differentiation of consumer liability depending on the amount of the controlled substance found. To implement this, the part 1 of article 328 is divided into three corpus delicti. One of the key innovations is introducing the concept of significant amount . It is made in order to separate socially dangerous situations from the less dangerous ones, those when the consumer is punished inadequately; for example, possessing of a small amount of psychoactive substances, such as a couple grams of cannabis. We propose to establish a significant amount of at least 5% of the large size, which is defined by the Council of Ministers in its turn, for each controlled substance separately.

Our edition of Part 1 of Article 328 establishes liability for manufacture, processing, purchase, storage, transportation and transfer of controlled substances in significant amount. Since there is yet no such division in liability according to the size of the controlled substances found, the transfer of drugs in small amounts (without property benefit purpose) is recognized as highly socially dangerous actions by Belarusian punishment system. Often drugs in small amounts are transferred to a close friend and clearly this action does not carry the same social danger as drugs sale. So according to the bill, such actions (involving small amounts and no property benefit purpose) must be moved into the Code of Administrative Offenses, i.e. stop being a criminal offense. This approach will relieve the work of the investigation and significantly replenish the state budget with fines. Part 2 of the proposed wording of Article 328 establishes liability for actions provided in Part 1, but already committed in large amounts.

The second group of amendments concerns the need for a clear distinguishing of crimes which are related to the sale (with property benefit purpose) of controlled substances. The third part of Article 328 in new edition establishes liability for the illegal sale of controlled substances with property benefit purpose, where the upper scope of liability is limited to 6 years in prison. This will give the opportunity to a court to impose a suspended sentence in case of a solitary sale instance, also considering the personality of the culprit. Actions committed with sale purpose (with property benefit extraction purpose), when this purpose is proved, should be qualified as preparation for sale (in order to get property benefit), and since the crime has not actually been started, the maximum penalty for this is limited to 3 years of imprisonment.

Despite the fact that part 2 of article 328 in its current edition is designed to stipulate responsibility for the sale of controlled substances, the vast majority of distributors are actually condemned in part three of this article that is more severe. The fact is that part 3 in most cases applies if the defendant previously committed actions related to controlled substances. But it is obvious that before you sell something, you must first acquire and store it. In the new edition of this part (which becomes part 4), only those distributors who were previously convicted for the sale (in order to obtain property benefits) should be punished. The maximum sentence under this article is reduced by three years — up to 12 years in prison. In addition, the legal criterion of a “particularly dangerous” substance is excluded, because the large amount of these “particularly dangerous substances” is already much smaller than the rest substances have.

Recently a legal criterion of laboratory glassware or laboratory equipment usage appeared in part 4 of the current edition of Article 328. Indeed, the presence of a laboratory indicates the industrial scale of psychoactive substances production which should entail increased responsibility. But the term “laboratory glassware” is too controversial because an ordinary bowl, flask and pipette can be included here. “Laboratory glassware” is removed from this part while laboratory equipment still remains in it. In addition, the legal criterion “in a consist of an organized group” is removed from this part because it is wrong to imprison simple “stashers” (infantry of big drug dealers in CIS countries, people who make single stashes with drugs for consumers that are sold via darknet afterwards) from 10 to 20 years rather than true organizers of such groups. Such liability for organizers of criminal groups is established separately in article 328-2.

Article 328-2 in the current edition is the most striking example when, for some reason, the state severely punishes consumers of controlled substances. For the use of drugs or the appearance in public places after their use administrative liability is already provided. Introduction of criminal liability for repeated violation can only pose a threat to life and health of a drug-dependent person as he will be afraid to appear in public and call for help. This article is clearly superfluous for the Criminal Code and it must be excluded in its current form completely. Technically, an article that establishes liability for the organizers of criminal groups (heads of online stores) is introduced instead of it.

Another amendment concerns children. In 2014 the age of criminal responsibility for the distribution of controlled substances was reduced from 16 to 14 years. Hundreds of children who made stashes with controlled substances received monstrous terms of imprisonment, and business organizers remained in the shadow. A child at the age of 14-15 does not yet understand the danger of drugs and, moreover, does not understand their types and sizes. Working as a courier for them is just an interesting adventure and easy money. We can not break human lives at such a young age, therefore the age of criminal liability under article 328 is returning to its previous level — 16 years old.

The proposed bill is developed with the “Youth block” coalition and can be found here.

Unless otherwise noted, text of this article is licensed under the Creative Commons Attribution 4.0 International License.