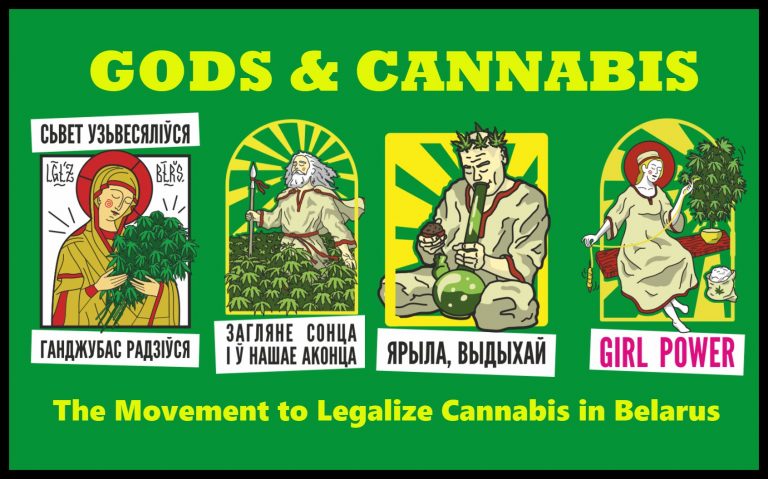 What is their goal?

Belarus is a country with authoritarian government in Eastern Europe, often called “the last dictatorship of Europe”. It has one of the most harsh drug policies in Europe, with people facing 10-years imprisonment for marijuana use. Legalize Belarus is trying to further education about psychoactive substances and shift public attitude towards cannabis.

Today around 15 thousand people in Belarus are incarcerated for nonviolent criminal offences, connected with controlled substances. Large part of them are drug users imprisoned for 5-8 years. In penal colonies with inhumane conditions, they are humiliated by staff and forced to psychical practically unpaid labour. In the correctional facilities, they are wearing distinctive stripes, just like in Nazi concentration camps. Some colonies are specially built after the authoritarian president Alaksandar Łukašenka ordered to create “intolerable conditions” for people who are convicted for drug-related crimes and “set such a regime in these prisons so that they pray for death”.

However, drug users are often convicted for “passing off” without any evidence that meets the burden of proof. It is enough that the judge arbitrarily decides that the accused had an intention to sell or the crime was committed not by one individual, but a group of people. If so, the accused can end up in prison for up to 15 years.

Police officers are interested in opening more criminal cases under Article 328, as it gives them salary increases, moves them up the career ladder and generally improves crime statistics of The Ministry of Internal Affairs. Apparently, that is why this influential governmental organisation has blocked adoption of yet a minor change in Article 328 that was passed by the Parliament in May 2018.

What is Legalize Belarus?

Legalize Belarus is a civic movement that emerged in 2017 as a reaction against inhumane and ineffective drug policy in Belarus. The campaign is trying to further public discussion on drug policy in the context of human rights, civil liberties and with an evidence-based approach. Activists focus on educating youth about drugs, about harm reduction practices and on advocating for decriminalisation of small amounts of controlled substances.

The organisation faces many obstacles and brutal opposition of the authoritarian government. Activists are often refused to rent a venue for education lectures, national television creates propaganda reports about them, their website is blocked by the Ministry of Information and special forces break into their parties to inspect attendees for illicit substances.

Decriminalisation of small amounts of the controlled substances remain the main advocacy point of Legalize Belarus. In 2018 they collected around 3000 signatures under the petition for decriminalisation and organised several public actionsto promote drug policy reform.

“Nobody remembers when the god of sensual love Jaryla was diagnosed with cancer. Nobody remembers when he started chemotherapy and lost his hair. Jaryla has always been portrayed with a bong in his hands. Probably, he struggled with loss of appetite caused by harmful cancer treatment”, — one of the collection’s images described on its website.

The Gods & Cannabis series consists of images of Slavic pagan gods and the Mary, mother of God, portrayed with cannabis processing and use attributes. The collection is aimed at decreasing fear of cannabis and promoting scientific and responsible attitude towards its users. A full room of people gathered on its presentation in the capital city Minsk to hear a lecture about economical benefits of reasonable cannabis policy.

“The goal of the collection is to fight the fear of cannabis in Belarusian society through provocation, laugh and discussion. Fear is an irrational feeling that only increases harm from drugs and makes drug use even more hazardous”, — a local coordinator of Students For Liberty and a founder of Legalize Belarus Piotr Markiełaŭ says.

In July 2018 The Global Commission of Drug Policy posted a paper on Belarus, where mentioned that “the only way to end the vicious cycle of stigma and prohibition is to implement a people-centered approach that is more conducive to creating safer and healthier societies” and stated that incarceration for non-violent drug-related crimes should be ended.

More and more countries around the world move to decriminalisation and legalisation of cannabis. But Belarus remains a country where the life of marijuana users is broken by the most severe drug policy around Europe, that sends people that did not commit any violent crimes to jail for insupportable terms.