According to the Democracy Index compiled by the Economist Intelligence Unit, Belarus is ranked 137th of 167 countries and is considered an authoritarian state. Alaksandar Łukašenka has been the country’s president since 1994, making him the longest-ruling president in Europe. 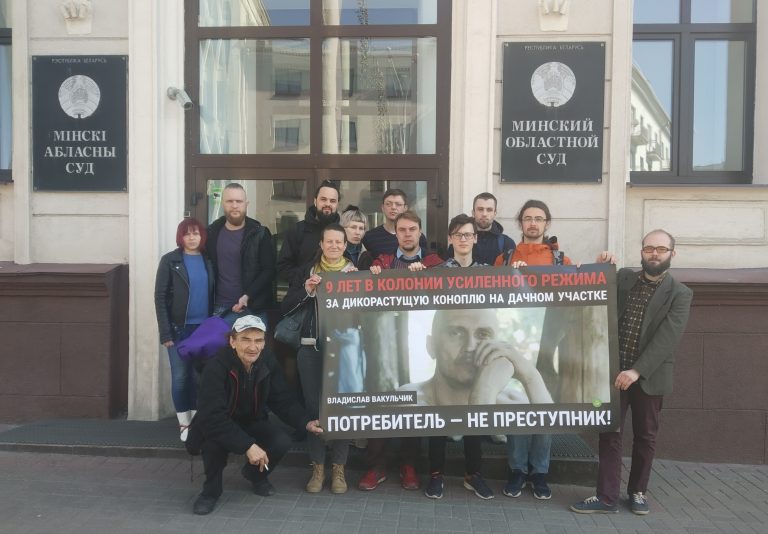 Throughout Łukašenka’s presidency, he has never been known for mincing his words. On 26 March 2019, during a visit to a local farm, he immediately fired three officials, including a governor, over cows being kept in dirty conditions. “Look at this cattle! It’s all crapped, everything has bred on wool!”, — he said. The Belarusian president is renowned for coming up with straightforward solutions to problems. Born in a small village, he started his career working in the collective farming industry and didn’t change his methods much after assuming the presidency.

In the early 2010s, the drug market in Belarus became inundated with synthetic cannabinoids which, in contrast to naturally grown cannabis, were legal at that time. As soon as any chemical was banned, three new legal formulas would replace it on the market. With each cycle, these new substances were becoming increasingly unpredictable and dangerous. Both state and independent media spoke out about cases of teenagers gouging out their own eyes under the influence of these new unstudied drugs.

As always, the president came up with a simplistic solution. In 2014, he signed a decree “On urgent measures to counter illegal drug trafficking”. One year later, speaking to the Ministry of Internal Affairs, Łukašenka ordered the creation of “intolerable conditions” for people convicted of drug-related offenses and to “set such a regime in these prisons so that they pray for death”. The administration subsequently implemented this order. Severe restrictions on freedom of speech and disrespect for basic civil liberties made this blindly prohibitive approach to drug regulation especially violent. Enforcement of punitive laws has led to mass human rights violations on an incomparable scale.

Within the context of a strong centralised power, the government sets numerical targets for the amount of criminal cases that are to be brought to court by the law enforcement bodies. Failing to perform accordingly can lead to officials being demoted. Officers are given additional incentives to initiate criminal proceedings on drug-related cases through increases in rank and pay. The salary increase for a single drug distribution case leading to a conviction can exceed the median salary in the area. In the absence of an independent judiciary, more than 99.7% percent of criminal cases end with a conviction.

An important practice that contributes to the cruelty of Belarusian drug policy is the so called “test purchase”, or even “test selling”. This means that, in order to produce evidence, authorities will stage drug transactions. The “investigative action” is almost always facilitated by people who are already being prosecuted and are seeking to escape punishment Since, as stated in the notorious Article 328 of the Criminal Code of Belarus: “A person who […] actively contributes to […] the incrimination of the persons who committed the crime, […] shall be exempted from criminal liability”. When a person is arrested, this method is often used to find other drug users among the friends of the arrested, and initiate criminal proceedings against them.

A recent criminal case involving a Belarusian citizen, Uładzisłaŭ Vakulčyk, may serve as an example of the application of such a policy. In early 2019, Uładzisłaŭ was sentenced to 9 years in a reinforced regime corrective labour colony, essentially for possession and use of cannabis that grows wild as a weed at his dacha.

A friend of Uładzisłaŭ’s, who was already prosecuted under Article 328, came to him and took a bag of cannabis without permission, to which he testified in court. However, after the judge reminded him that during his own trial he had testified that is was Uładzisłaŭ who handed over the bag to him, he quickly changed his testimony. Nevertheless, this dubious evidence was enough for the judge to sentence Uładzisłaŭ Vakulčyk for drug distribution. Uładzisłaŭ subsequently wrote an open letter, where he stated, “I do not want to lose faith in justice”.

Numerous cases where people have been  convicted even without material evidence were reported by the “Mothers 328” movement, a group started by relatives of those imprisoned. Moreover, the concept of “distribution purposes” is often applied, meaning that there is no need for a prosecutor to prove the fact of distribution. It has never been so easy to send a person in a labour colony. But the worst thing is that we don’t really know what happens in these colonies.

In March 2019, Amnesty International posted an Urgent Action appeal to protect the rights of two juvenile prisoners held in a Belarusian juvenile labour colony, “in conditions which violate their human rights and are subjected to harassment and discrimination by the prison authorities”. The organisation states that, “Their case is emblematic of thousands of teenagers imprisoned in appalling conditions following unfair trials for minor drug-related offences”.

After interviewing parents of those incarcerated, who are allowed to visit their children several times a year, Belarusian human rights online media outlet MSpring.online compared conditions in this colony to those in the Auschwitz Nazi concentration camp.

For instance, juvenile convicts have only four minutes to consume their prison food and are beaten with sticks if they break the rules. The colony’s administration does not allow parents to send shoes to their children, so prisoners are typically wearing shoes several sizes too large that they have managed to buy in the colony at exorbitant prices. After washing, many inmates have to wear wet clothes, as they have only one set which often can’t be dried during the night after being washed. In the juvenile colony, inmates are made to  recycle used tires, using their hands to separate the rubber from the steel cords. It is important to note that around a half of this colony’s population are people aged from 14 to 21 convicted for drug-related offences.

In Belarus, where governmental institutions are known for a general lack of transparency, prisons and penal colonies are some of the most closed institutions. Censorship of mail correspondence leaves those convicted with no chance to report on their condition. Indeed, there is a lot to hide from the public, as deprivation of liberty leads to deprivation of human dignity and basic human rights. Convicts are afraid to speak out about the dehumanizing scenes they witness in the colony as a result of being kept in constant fear by the prison guards and stewards, who are recruited from among the prisoners and appointed by the colony’s administration.

The infamous colony №22, known as “Wolf Holes”, for adult inmates, was created following a direct order from the president. As reported by a formerly convict in a film, produced by Legalize Belarus, a Belarusian group advocating for decriminalisation, prisoners are forced to clean copper and aluminum wire with their bare hands. For refusing to carry out this work, inmates face being placed in solitary penal confinement or having their prison term extended. In other colonies, inmates are engaged in the production of furniture, which is then exported abroad.

“It may be argued, that our penitentiary institutions are business-oriented firms making money”, — Viktoryja Fiodarava, the head of human rights organisation “Legal Initiative” said in the film. Indeed, this furniture was publicly demonstrated at an international furniture exhibition in Poland. Prisoners involved in its production are paid close to nothing — around €1 per month,  with the average monthly salary in Belarus being around €400.

However, the effective use of these funds raises serious concerns. For the last 10 years, the European Union has been adhering to “the strategy of drawing”. This implies that in exchange for alleged leverage and influence over the regime, it restricts its public criticism of the Belarusian reality and prefers funding government projects over those of non-governmental organisations, many of which publicly oppose the state’s authoritarian policies.

Thus, thousands of people are convicted of non-violent crimes and subsequently held in hazardous labour colonies. Meanwhile, state media readily promotes images of European officials visiting a “correctional facility” and accuses critics of aiming to undermine stability in the country.