Street picket in Minsk for decriminalisation

On 17 February 2018, the day before local election day, Legalize Belarus activists organised the first picket for decriminalisation of small amounts of controlled substances. The picket was held in the centre of Minsk, near Kastryčnickaja płošča. Activists brought a provocative banner, showing that simplifying a position towards current drug policy leads to appalling consequences. 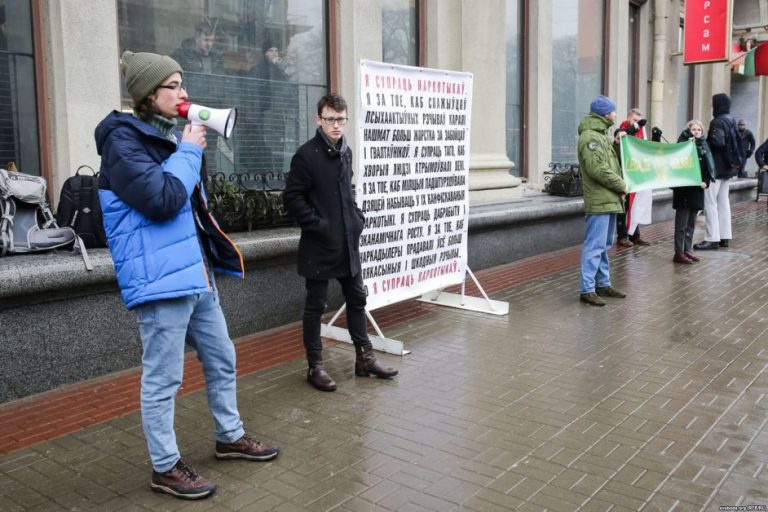 Activists handed out 1500 leaflets with information about the campaign and the need to change current drug policy in Belarus.

Activists brought both official and national flags to show that the problem of drug policy unites the whole nation.

The electoral campaign as a way to make a statement. Moreover, some questionable means are being used. Today in Minsk Belarusian opposition activists conducted a rally for the legalisation of light drugs. The event was held as part of the pre-election campaign of one of candidates from BNF party. Hardly a dozen of youngsters in the centre of Minsk today decided to conduct an action with a pretty unexpected message — light drugs legalisation.

In social networks the action has been proclaimed to be an “authorized meeting”, as part of the local elections campaign of a candidate from BNF. However, what voters did he expect to meet in the city centre, when his electoral district is in “Tractor Plant” region?

– [Mikita Krasnakucki] I myself express solidarity with this. As a candidate and possibly as a future deputy I decided to give the youth an opportunity to speak on the issue of article of the Criminal Code and on the subject of legalising marijuana.

Exactly the trustee of this candidate Piotr Markiełaŭ, organised the rally today. By the way, he admitted having tried drugs.

– [Piotr Markiełaŭ] I’ve visited The Netherlands, Amsterdam and tried it.

We asked all the participants of the action whether they’ve tried marijuana and one answer came as a surprise.

– Have you tried marijuana yourself?
– [Stas Šašok] Yes.
– [Ksienija Tarasievič] I have an experience of using light drugs including marijuana.
– So you haven’t smoked yourself?
– [Michaś Varancoŭ] No.
– But you support legalisation?
– Yes.

Memorized this guy in orange jacket? Now have a look at the video that is posted on social media. Looks a lot like him, doesn’t he? We can’t state that it’s exactly marijuana, but it looks very convincing. Probably, the parents have no idea about their son’s hobby, and he just didn’t want to confess in front of the press.

In their chats the activists without hesitation confess to using drugs and state, likely high, that they need people, a base of people to be more precise, for further mass actions for radical changes. Looks like they are planning to create a society of drug-addicts in the future.

By the way, famous opposition politicians support these youngsters. We called Aleś Łahviniec, the leader of “Dzieja” movement, which supports these kids.

[Aleś Łahviniec] This is a joint initiative: there are people who hold their campaigns and some “Dzieja” activists participate in them.

[Vital Rymašeŭski] I opened the website of “Dzieja” and it was written there: “Dzieja campaigns”. There were links, and one of those campaigns was “Le-ga-lize”. And there one can also find the link to the video that I downloaded from their official Facebook page. It’s your personal decision if you want to cooperate with them.

It appears that behind this “legalisation” and frail shoulders of these drug activists are some stronger structures. New faces of opposition politics have long been ruled by compromised mastodons, since nobody believes particularly them and their slogans. Meanwhile, these kids are getting cold for their idea to smoke weed.

By the way, this Aleś Łahviniec is ready to spend money of his organisation sending legalize supporters abroad. Apparently, to smoke what is forbidden in most countries of the world.

– What’s your attitude to the subject?
– Drastically against. We’ve been to Amsterdam… Drastically against because… I don’t know… the situation is not the healthiest there.
– Obviously negative, negative, obviously.
– I’m against drugs.
– Probably not.
– There will be too much permissiveness.
– If marijuana is be legalized, it won’t be long before other drugs are.
– Yeah, I agree with Darja, I treat drugs negatively.

The next day, Lidzija Jarmošyna, the head of the Central Electoral Commission, called the action “a blatant event”.

Two days after the event, we received an evidence that Department of Drug Control of the Ministry of Internal Affairs started investigating identities of people, involved in the campaign.